Priests and parishioners, tourists and beggars

Sounds of the Easter night recorded at the Trinity Sergius monastery in Sergiyev Posad (with a few bits just behind the outer wall). Priests and parishioners, tourists and beggars. Footsteps over the cobbled pavement. Bells, clocks and hymns from the crowded halls. Doors slamming right beside you and trains moving somewhere in the dark. No lighting apart from the hand held candles, a few lamps and the moon. Every church of the monastery stood open on that special night, I visited all of them – including those normally closed to the public. 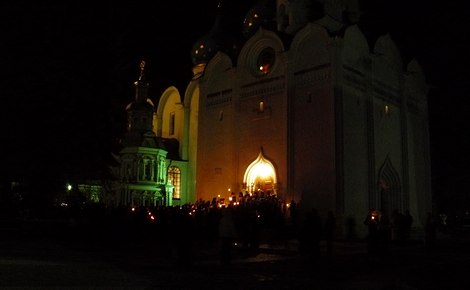 04/27/2011. And here’s another one Easter sound, recorded at the Chernigovkiy skit (skit can be roughly translated as the hermit’s monastery) located within a 30-minutes walk to the south-east from the Sergiyev Posad train station. Skit is known for its subterranean caves once used as a shelter for the orthodox hermits. Everyone is allowed to to walk up the stairs of the belfry to ring a bell this week. Recorded by Alexander Arianov.