Two sounds recorded at the very same location in Sergiyev Posad but within a year of each other. 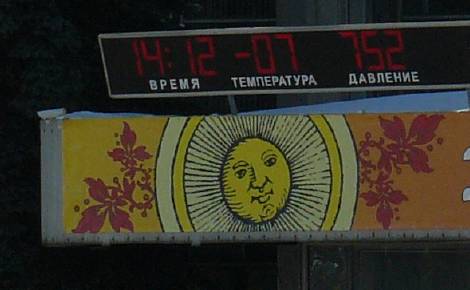 The place is called Sovetskaya Square. This once grassy but now snowy plot of land could be easily found right at the city centre. To the east are the McDonald’s golden arches, to the west – the city council building and the mayor’s office, marked with the huge mosaic hammer and sickle state emblem hanging over the entrance. Hammer and sickle was the core image of the Soviet empire, hinting at the workers and countrymen role in forming the new communist state, now – part of history itself.

It is the final day of the week before Lent – the festive period known as Maslenitsa in Russia. As usual, there is a high and smooth pillar looming at the centre of the square, and a wooden cage is elevated to the top of it with a roller and a rope. Inside is a rooster frightened to death, a trophy for the one who is fit enough to climb the pole with his shirt off. The host is doing his (or her) best to cheer the crowd inviting everyone to take part in.

Some are sliding down, others are more motivated. A short and powerful climbing and soon after the bird is quivering in the winner’s hands – head down, legs tied together. Everyone seems to be so happy, the winner looks triumphant. This tradition has been around for ages, now it reminds of a time of great poverty when getting an extra rooster could largely benefit the family budget. But here we are, in the 21st century, standing in the crowd at the city centre, admiring the guy with the bird he just doesn’t need anymore.

2010, the rooster is trying to escape the cardboard box he is squeezed into.

2011, the beginning of the get-a-bird session, as essential to Maslenitsa as the hammer and sickle emblem was essential to the climbers’ parents many years ago.

These are the moments when things like penicilling invention, book-printing or long distance communication look nothing but a bleak and futile whim of humanity.